One of the Aevon travellers has travelled through India with his bike and Aevon trailer. He shares his experience of festivals. 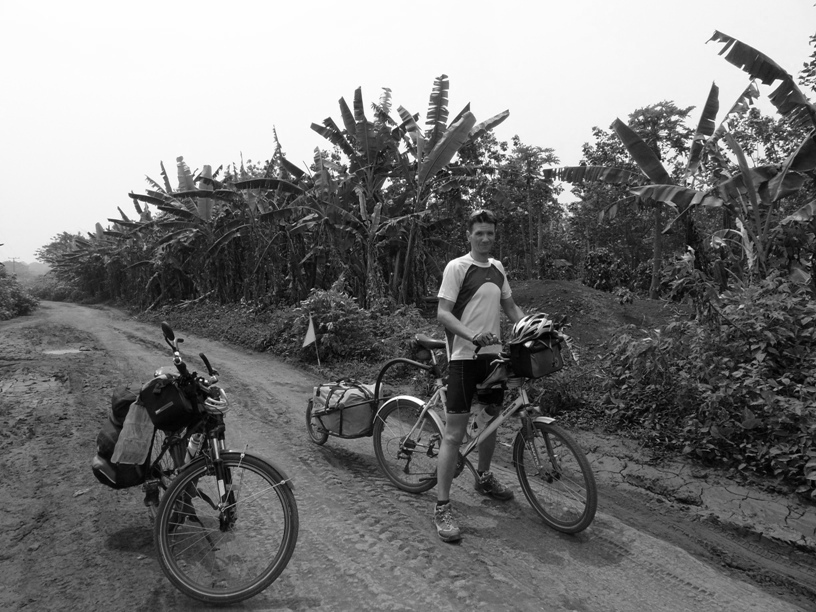 India is not only famous for its monuments but also for its festivals.

« Baisakhi » in the city of Amritsar

During your trip in Inde, begin with Amritsar, one of the most interesting cities. One of the most important days of the year is Baisakhi, generally on April 13rd or 14th. Often called Vaisakhi, this event celebrated the harvest. People take baths in the sacred river and pray before eating together. During this event you will see traditional dances and hear traditional songs.

Thrissur is the perfect destination to discover the ‘pooram’. It happens in the temple of Vadakkunnathan which was dedicated to Shiva.This event is religious.
Many elephants parade in the streets, decorated with bells.

The Tamil Nadu is ideal to see the Pongal, one of the great celebrations of the state. On the first day, old clothes are burnt and people clean their houses. On the second day, women decorate their homes and prepare food. On the third day, the herds of animals are washed and fed. On the last day, all families gather along the rivers to share the same food.

Cyril and Elodie have been travelling through New-Zealand on their way to Wellington the capital, then farther to Waiheke island. 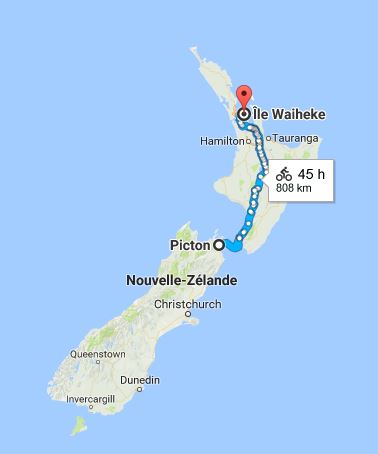 “After travelling through the South island, it’s time for us to take the ferry to Picton to reach the capital of New-Zealand, Wellington !

The crossing on the ferry took us 3 hours and it was beautiful ! We sailed through the ‘sounds’ or ‘little fjords’ and we saw beautiful landscapes (we were lucky to have such nice weather.) We even came accross dolphins playing in the waves of the boat : the Hector’s dolphin (the smallest in the world) and the common dolphin.’

The activity of the capital was in contrast with the almost uninhabited island the couple just travelled through. However there were very few vehicles on the roads.

After visiting the capital (25mn on foot to go from one end of the city to the other), the couple began their trip to the North of the island, along the ‘Hut River Trail’. It’s an old railway. 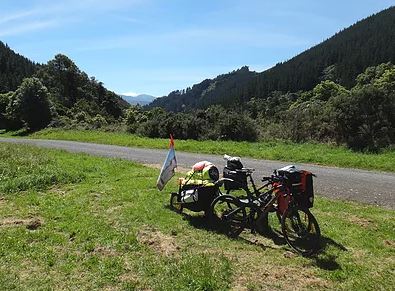 ‘Only a part of this trail is really for MTB because of the collapse of a bridge where we have to cross a river. Our Aevon bike trailer meets our expectations. Mud, sand, road, it follows us easily. We almost never have to question ourselves whether the roads we will be using will be compatible with our bike trailer.’

Then Cyril and Elodie continued their trip to Whanganui with a beautiful view on the volcanos.

At Turangi, spas offered to take a hot bath coming from natural sources. Then from Turangi to Taupo, 55km on the bikes offered an amazing view on lake Taupo, the biggest in the country.

‘Upon our arrival to the city of Rotorua, the smell is very strong. The city is build on a sulfur deposit and there are holes everywhere in the city. This is also why the lake looks yellow in some places. The city is famous for its population of Maoris. But here they look and live like anybody else. So we are not sure if we met some of them. Only certain tattoos betray the rank of a person in his tribe.’

Cyril and Elodie took the ferry again, in the direction of Waiheke island, famous for its vineyards and only 15km long for 3km wide maximum.

The item spent their last days there before flying to Adelaide in Australia where we’ll follow them soon !

Infinite Trails in Iceland with a trailer Kit L80

We are pleased to announce that the Swiss Sebastian Doerk , photographer, film producer and bike enthusiast went on a trip to Iceland with an Aevon Kit L80!

Sebastian works mainly in the bike industry. He shoots mountain bike films that transport a story instead of only covering massive tricks. For his new trip in Iceland he left with a couple of friends and their bikes as their only means of transport. They only online casino canada lacked the right trailer suitable for small paths. It is with great pleasure that we lent them a Kit L80 for this new adventure.

Take a look at some pictures of his latest adventure in Iceland: 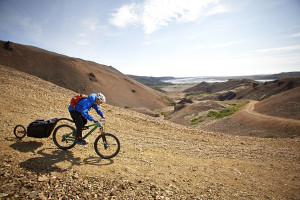 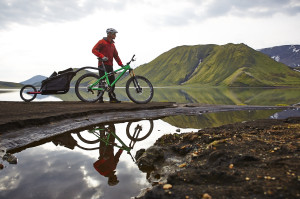 Sebastian Doerk is known for the film “Sea of Rock”, elected video of the year.. Check out his video: Sea of Rock